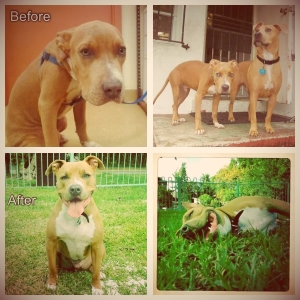 This particular throwback starts four years ago, when we brought Galileo home as a medical foster. He had a broken back and was completely lame in the hind legs. He had a compression fracture between his L1/L2 vertebrae, the result of blunt force trauma. We know this from the presentation on the X-rays, which I still have.

I spent hours that first day pulling ticks out of his ears and from between his toes. He was weak and emaciated with localized demodectic mange on his head, ears and back.

For the first month or so, he was unable to bend down, so we held bowls of food and water up to his mouth. During those days when his legs didn’t work, we were his legs, carrying him outside to potty or to his bed.

He gained strength slowly and his spine began to heal.

He started to eat and drink on his own. He began to walk- first a few steps, then a few feet and then, finally, down the block. Walking was an important part of his physical therapy, and physical therapy is hard work. Often he could walk to but not back. On those days, we picked him up, held him against our chest and carried him home.

We’ll never know what happened before and our imaginations only gets us so far but his behavior does give us clues. Four years later, he still panics if we lift the mop or the broom too fast or too close, loud noises send him deep into the corner of the room, head bowed, facing the wall. His past is elusive, and that is okay. Not knowing is selfishly comforting but it is also a reminder that he, like each of us, is not defined by his past.

His truth, his real story, is today.

Galileo is now the strongest and the fastest in our pack. He loves to run after sticks, he can run down any other dog he meets and chasing a wildly bouncing tennis ball is his best day ever. He doesn’t walk normally but normal was never in the cards for Gali. Normal was never the goal. What we wanted for him was probably what he wanted for himself: to be mobile, pain free and loved. 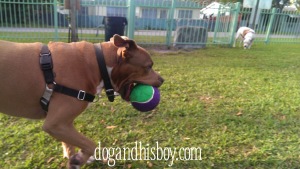 We don’t know what his orthopedic health will be like in the future. His abnormal gait puts additional pressure on his knees and he’s already strained his ACL a few times. I can see a medial patellar luxation (MPL) repair in his future. We keep a close eye on his weight and give him supplements and herbal anti-inflammatories when he seems painful. If that doesn’t work, we break out the Rimadyl and tramadol.

His medical recovery has been phenomenal to watch. To see him run carefree is delicious. Yesterday, we were all in the dog park across the street. While sitting on a sawed-off stump of Florida pine, I watched as he ran and ran and ran. I smiled as he wrestled and rolled over rocks and dirt. Each of my boys tries hard to outrun him but they always fail and I cheer him on every single time.

I’m blown away by how loving, friendly, and happy he’s become. He adores people, all people- and if any dog has reason to be angry, aggressive and distrustful of people, it is Galileo, but no. If you sit still long enough, he’ll trying climbing up into your lap. Be warned though, he can’t control his licker!

About Bernard and The Graffiti Dog

My name is Bernard Lima-Chavez. I share my life with 2 deaf dogs, 2 hearing dogs, 6 cats and my husband. Let’s call him Ricky Ricardo..

The Graffiti Dog focuses on deaf dog awareness, training, nutrition, health, enrichment and education. I am a storyteller who incorporates photo of my deaf dog Edison with bright, colorful street art and graffiti to connect and engage with my readers. Read More About Me and The Graffiti Dog Here...

Our Dogs Are Fueled By Dr. Harvey’s!

A Dog Walks Into A Bar