The Story of a Deaf Healing Dog Named Edison

For survivors of CSA or other forms of sexual assault, this post contains brief references to some of my personal experiences that may be triggers for you. This is not my intent and I encourage you to not read this post if you have concerns about handling trigger responses.

This article was originally written for and appeared on Victoria Stilwell’s Positively.com.
Reprinted with kind permission.You can read the original here.

I’ve been asked many times, “Why deaf dogs?” and it’s a good question. I’ve been trying to formulate an answer, both for myself and for others. In searching for the right words, I’ve been thinking a lot about my deaf dog Edison and the deep connection I feel with him, one so deep that it rivals the Sargasso Sea.

I cannot explain my attachment and near obsession with him without sharing my own childhood trauma. They are so tightly intertwined that one cannot be understood without the context of the other.

I am both physically and psychically connected with Edison in ways I have never experienced with any other living being, canine or otherwise. I trust him in the deepest recessions of my heart, and, for me, that is a powerful feeling and one I usually avoid at all costs.

The few times I have allowed myself to become vulnerable in any significant way, at least with a fellow human being, I have torpedoed the relationship. Scorched earth self-destruction isn’t without it’s complications, but it does give me the illusion of safety. I have paid a price for this, but generally I’m okay with it. Sure, there are moments of isolation and loneliness, but I take comfort in a silent phone that doesn’t ring, a rerun of Golden Girls every night at 11 and a mood stabilizer, maybe two.

But more than anything, I find safety in Edison, his soft, warm breath against my body, sleeping the deep, peaceful sleep of a dog who cannot hear the rumble of trucks, schoolchildren laughing and chasing their way home or the neighbor’s dog barking at the postman, marking the hour every day at four.

I find his presence healing, for he has this astounding calming quality about him. I’m not the only one who feels this. In a previous article, I wrote of finding my boss curled up on the floor next to him, feeding his soul for five minutes before returning to his duties as the Senior Shelter Director for a local animal shelter.

Yes. Edison is a healer, and the connection between us is palpable.

Perhaps it’s because Edison was my first deaf dog, and we were forced to learn to communicate differently with each other- with soft, fluid motions of the hand, undetectable to most people not in the know. It feels like a secret language in a secret club of two; no humans allowed. It is a language we crafted and learned together and now, three years on, not speaking seems to be the most natural way of communicating.

Communication like this creates an atmosphere where bonding on the deepest level can occur. I’m not saying that I have no connection to my other dogs; rather, my connection with Edison is more profound. Yes, maybe that’s it.

Or maybe it’s that I’ve found safety in telling my secrets to a creature who cannot hear in any conventional sense of that word. All dogs listen, to be sure, but a deaf dog hears you in ways no other dog- or person- can and you can bet your life they won’t say a peep. Deaf dogs hear with their heart, as Christina Lee from Deaf Dog Rock wrote. 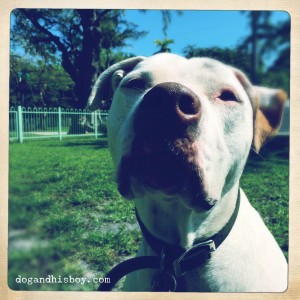 But back to Edison, my healer.

Like any good dog, he does not judge me on bad days when the triggers come fast and panic takes over with very little warning. He simply waits as I crouch on the floor, facepalming, trying to get myself to breathe in then slowly out, trying hard to let go of the fear, to get back inside my skin, to escape that dark, dank cellar where the longest chapter in my life began. As I breathe myself back to life, back to the here and now, where there is coffee brewing and I can hear the hum of the refrigerator and the terrazzo floor is cool against my body, I know that it is almost over. As I breathe deeply, filling every cavernous pocket of my body with oxygen and hope, waiting for it to pass, Edison is there, his head resting nearby, two eyes watching as I slowly become his dad again.

Yes, our deeply rooted connection may have everything to do with all of those things

But if I’m going to be completely honest, I think that his deafness reminds me of an earlier time when no one heard me, when I had no other way of communicating except my voice, those early years when no one listened to me when I spoke.

Unlike then, Edison both hears and listens, and when push comes to shove, he will protect me like no other. He provides a safety that my abuser destroyed, and love, loyalty and protection in all the ways my mother failed me.

My birth certificate says that I’m forty-four years old, but, for all intents and purposes, I am still a ten-year old boy. I am stuck, emotionally speaking, at the end of innocence and the onset of the aftermath. My forty-four year old body has a squatter, and my name is Ryan.

Yes, you know me as Bernard, but my parents gave me that as a middle name. I changed it when I left that speck of a town about a month after graduating high school. I ran from a place shadowed with memories too sharp to allow anything but escape.

Driving cross country, I was working double-time to forget that man whose veins coursed the same blood as mine, the same one who started molesting me when I was six-years old. I ran fast from my mother, who neither believed me nor protected me, and I ran helter skelter away from that basement, the one that still holds terrible secrets I haven’t shared with anyone, not even Edison. Some memories don’t fit neatly into words.

Sometimes running away is an act of survival, a messy, complicated exercise in clawing yourself up from your knees. I ran to the anonymity and invisibility of New York City, arriving pretty much sight unseen and began a long snaking road that has always bared teeth, even during the happy times.

In making that move and by claiming a new name, I was severing all ties with the Before. I was putting miles between me and that man. I put hundreds of signposts between us and tried to create a safe place for myself among a million other people searching and longing, scratching hand tooth and nail to become something better, different or safer than they were the day that they arrived.

My heart needed to know what After felt like and I’ve pursued that relentlessly for 26 years. Being rape as a child will mess with your head and it takes many years to find peace with it. I’m not quite there, but I’m getting closer, and that has everything to do with a deaf dog named Edison.

Yes, I know that the current en vogue expression is “sexually abused”, but a child cannot consent to sexual anything so let’s call it what it is. Let’s give it a proper name. Let’s call it child rape.

I like that phrase because it claws and screams the anger I feel. It folds back polite niceties, revealing the hard, ugly truths in wickedly vivid, technicolor hues.

I’ve always gravitated towards those who have never been considered, seen or listened to, those who were counted out if counted at all. I identify with those who haven’t been given a fair shake, those who have been ignored, neglected, abused and relegated to the margins, licking their wounds in unseen silence. And who embodies this as frequently as a deaf dog?

In my house, however, things are different. Here, deaf dogs are honored. They are respected and valued and provided the training they need to live normal, happy lives. Their deafness is celebrated and their needs- physical, medical and social- are met every single day, to the best of my ability. If I can’t always love myself, Edison, at least, is always adored, which gives me hope for myself.

Here in the home I’ve created with my husband, the first and only man I trust without reservation, deaf dogs are treated as the magical creatures they are- for it was in a 10-week old deaf Dogo Argentino- Pitbull puppy that I found the one salve that heals my wounds and helps me every day get closer to survivor.

Until that day, it’s me and a deaf dog named Edison, snuggling, napping and resting our heads on each other’s body, the first type of physical intimacy I’ve found that doesn’t set my skin on fire.

About Bernard and The Graffiti Dog

My name is Bernard Lima-Chavez. I share my life with 2 deaf dogs, 2 hearing dogs, 6 cats and my husband. Let’s call him Ricky Ricardo..

The Graffiti Dog focuses on deaf dog awareness, training, nutrition, health, enrichment and education. I am a storyteller who incorporates photo of my deaf dog Edison with bright, colorful street art and graffiti to connect and engage with my readers. Read More About Me and The Graffiti Dog Here...

Our Dogs Are Fueled By Dr. Harvey’s!

A Dog Walks Into A Bar